Latest headlines delivered to you weekly

Thanks for your subscription!

You have already Subscribed!

Although many drivers feel Google Maps for navigation is indispensable, the maps and technology that human drivers rely on for turn-by-turn directions are simply not accurate enough for a self-driving car to navigate with. Autonomous vehicles require a much higher level of accuracy and detail for localization and navigation.

Instead, developers of autonomous vehicles rely on lane-level, high-definition or "HD maps", that contain much more data, including the location of trees, curbs and road signs, as well as where the painting lane markers are on the road are.

To build these HD maps and continuously keep them updated is a more complicated and time-consuming process, so automakers like Toyota Motor Corp are exploring ways to create HD maps more efficiently and for less cost and the results of a recent collaboration look promising.

The advanced research arm of Toyota, Toyota Research Institute-Advanced Development (TRI-AD), which is tasked with robotics and AI development for the automaker, has successfully completed a proof of concepts ("PoC") for HD map building using satellite images with a relative accuracy of less than 50 centimeters, which is enough accuracy to support autonomous driving.

TRI-AD worked with Maxar Technologies (Maxar) on the project along with Japanese IT services provider NTT Data. Maxar is a Colorado-based company specializing in Earth observation, orbiting satellites, radar and other services. Maxar and TRI-AD collaborated on the PoC and built automated HD maps for automated vehicles using the highest-resolution commercial satellite imagery.

The companies have been collecting the satellite images since April 2019.

Once a satellite image is captured, the map data is extracted. This is done by analyzing, correcting and removing "non-map image pixels" such as vehicles, shadows cast by large buildings, and occlusions due to the inclination of buildings in satellite imagery. What left is a cleaner image of the road which can be used to build HD maps.

The PoC project was able to achieve a relative accuracy of 25 centimeters for key navigation features, representing a significant improvement in accuracy. The maps created were verified to be useful enough for autonomous vehicles to navigate with.

The same image with all of the vehicles removed.

TRI-AD is Also Working with CARMERA

CARMERA collects street images from its fleet partners and drivers that agree to share their dash cam data with the company. The data from the street images collected from the vehicles is then used to make HD maps for autonomous vehicles. CARMERA is backed by the venture capital investment arm of Alphabet Inc. Google Ventures.

While this method is not as accurate as using satellite images, it achieved a relative accuracy of 40 centimeters for key navigation features,  which is still a major advance in camera-only detection. TRI-AD found that both methods are effective for HD map building for autonomous vehicles. 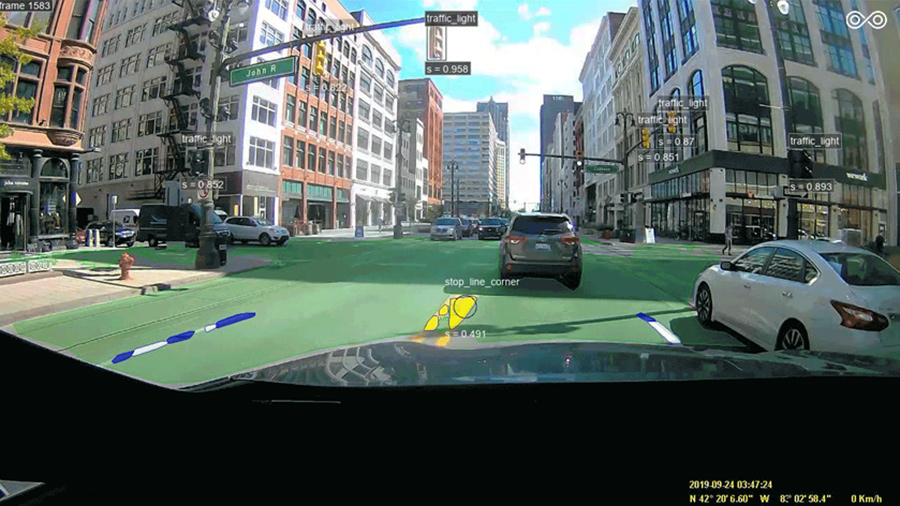 One of the issues with this method of creating maps is being able to keep the maps updated. An autonomous vehicle using a HD map for navigation requires it to be up-to-date at all times. However, simple things like a temporary road closure must be reflected in the map then pushed out to all of the vehicles that  will use it for navigation.

This is a painstaking process, which requires a vehicle to be manually driven over the area to be remapped to record the new changes. In the future, this may be able to be done using satellite images.

These methods to create HD maps takes much less time, reducing the cost of mapping the world's roads for autonomous vehicles.

In addition to all of the other partners on the various projects, TRI-AD partnered with TomTom, a leader in navigation and mapping services. The companies showed that urban roads, including lane markings, could be successfully created or updated in near real-time using TomTom's cloud-based transactional mapmaking platform, just with data collected from a vehicle's sensors.

Today just 1% of the world's road and lane network is covered by HD maps. That figure is assuming that HD maps available are for the entire highway road network in the US, China, Germany, and Japan.

The roads in the four countries makes up less than 1% of the world's total road network, so there is still much mapping to be done. However, with the research being done by Toyota and its partner companies, mapping roads for autonomous vehicles might be much easier in the future.

Eric Walz
Originally hailing from New Jersey, Eric is a automotive & technology reporter covering the high-tech industry here in Silicon Valley. He has over 15 years of automotive experience and a bachelors degree in computer science. These skills, combined with technical writing and news reporting, allows him to fully understand and identify new and innovative technologies in the auto industry and beyond. He has worked at Uber on self-driving cars and as a technical writer, helping people to understand and work with technology.
Recommended
Prev：Bollinger Motors Reveals the World’s First Electric Class-3 Commercial Truck Platform Next：Volkswagen is Exploring Ways to Use its EV Batteries to Power the Grid
Comment
view more